The early years curriculum - meeting children’s needs today, and preparing them for tomorrow

I'm sharing the PowerPoint from my keynote at the NAHT Early Years Conference 2019. There's also some press coverage from the TES.


Posted by Julian Grenier at 07:26 No comments:

This is the PowerPoint from my keynote presentation on 13th November 2019. Many thanks to Siren Films for the clip I used at the event.

What happened to curriculum in the early years?

Posted by Julian Grenier at 10:26 No comments:

Thank you for writing this blog, Julian. My reflections are the following:

Re: need a pedagogical repertoire.

Totally agree, and as such the pedagogical repertoire is one that engages young children with concrete, motivating learning experiences which in turn enables children to effectively e deepen learning be it: knowledge, skill, disposition or concept. In reference to phonics I would say to ensure the learning is meaningful it is as you stated done regularly through a systematic approach and is continually developed through the thoughtful interventions by the practitioner who understands where the child is in her/his learning. In other words, the teaching of phonics does not sit alone as a strand of learning but is focused in through specific adult directed learning as well as through meaningful interactions during the school day for example through children's writing, when greeting children : the incidental nonsense rhyme: Ben Hen.

Totally agree, having a clear understanding of where a child is in her/his learning, and focusing on what she/he can do as a means of enabling children to flourish across all areas of learning is critical. All children are entitled to a broad, balanced, in-depth and challenging curriculum.

3. Progress can be defined as being able to do more, and knowing more

Totally agree, in so much children need to have secured their knowledge/concept , skill or disposition before moving on, otherwise as stated there can be gaps. For example a child who is able to predict and hypothesise what might happen to ice on an open fire. This may indicate that she/he understands the effects of heat, however, that one observation or indeed solitary experience does not illustrate a secure understanding. If however, that same child has had similar experience of exploring heat and then is using language such as 'the chocolate will melt because of heat from the fire', then there a clear understanding the child is able to predict and hypothesize about some things, the next step could be what about plants with regards to water and sunlight. Here the child is subsequently building on her/his knowledge from a secure underpinning of meaningful experiences that deepen the child's learning over time.

4. The steps you take you are learning to do something can look different to your final accomplishment

Thank you for this, a very important review.

Thank you for this blog, as indicated in your conclusion, discourse is critical to moving the teaching and learning within this highly exciting age phase. Reflection and debate is always to be welcomed!
Posted by Julian Grenier at 08:43 No comments:

5 things to reflect on in the EYFS

In this post, I’m going to be discussing five aspects of early years practice which can be controversial. These are sometimes thought of as conflicts, in something like the following ways:

1. We need to have a pedagogical repertoire

For most of the time, the best practice is in the middle. The following graphic from Learning, Playing and Interacting (DFE, 2009) illustrates this

Emphasising curriculum in the early years - a step too far?

I was delighted to have a chance to join headteachers from infant, primary and secondary schools in the London Borough of Barking and Dagenham on Friday 12th July 2019 to talk about the curriculum in the early years. I've shared my presentation below.


Emphasising curriculum in the early years – a step too far? from Dr Julian Grenier

Posted by Julian Grenier at 11:03 No comments:

Thurrock Early Years Conference 2019: how can we help disadvantaged children to succeed against the odds?

The video clips I used are available to watch again without charge from Siren Films until Monday 11th February 2019.

Tristan walking down the street

Heidi looks at a book about thunder

Who's missing out on early years provision - and why it matters

Amanda Spielman, Her Majesty's Chief Inspector of Schools, argues today that schools can't solve all the social problems we face.

It's a good argument, and it's worth making it as strongly as she does.

For the most part, the best thing that schools can do to help children - including disadvantaged children - is be great schools.

When our mission creeps to far, the results are often rather disappointing. For example, I think Ofsted have shown pretty clearly that the schools with the best pastoral and curriculum support around healthy living seem to have no discernible impact on reducing obesity.

Similarly, research from the UCL Institute of Education is suggesting that one of the most powerful ways to support young children's social and emotional development is to concentrate on the core role of helping them to become better communicators, with a richer vocabulary. Focusing on the core job we have to educate children may have more impact than "mission creep" into other areas.

Causing more harm than good?
In my experience, specialist mental health interventions are needed for children in crisis. But some schools run nurturing and mentoring programmes which are staffed by well-meaning but poorly-qualified staff who don't have the supervision or support they need.

Whether these interventions cause more harm than good is a point worth considering.

Is it always a good idea to encourage children to talk about troubling and distressing things to a member of staff who hasn't been adequately trained? What is like for a child to return to the corridor, playground or classroom afterwards? Schools are not containing, therapeutic environments. Their therapeutic value rests, surely, in their capacity to help children achieve the pleasures of growth and development, and to socialise with other children, in an orderly environment with sensible and clear boundaries.

The early years are important - and different
This discussion about whether teachers should be involved in activities like toilet training does not apply in full to the early years. For example, in the nursery school where I'm headteacher we have many two-year olds on roll and of course many of them are not yet toilet trained. It's a task we share with parents.

It's also perfectly ordinary for a child just turned 3 and in a school nursery class to need help with toileting. The child may not yet have developed enough to have complete continence. Or they might be fine at home, but find things much harder in a large group setting, where the distance to the toilets is greater. 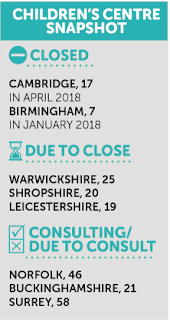 Finally, let's not forget that there was once a national programme to support parents in the early years: the Sure Start Children's Centre programme. The destruction of this programme in recent years ought to be a national disgrace.

Children who are being excluded from early years provision
This leads me onto a development which I find very concerning.

Some schools and settings are excluding children who most need nursery provision. The result of their actions is that the children miss out on their nursery education. When they arrive to start compulsory education in reception, they have needs which it's very difficult for a reception teacher to meet - as Amanda Spielman is arguing.

How does this happen?

Some schools put parents off, without actually saying their children aren't welcome.

For example, a parent recently told me of her visit to an early years open day at a local school. The executive headteacher spoke to all the parents and said that the school has "high standards". There is an expectation that children will achieve highly from day one in the early years and they are unashamed about "pushing" the children. All reception children are "expected" to enrol in an after-school club, so one day a week their school day will end at 5pm. Finally, the executive headteacher advised any parent who had misgivings to conclude that "this school might not be the right one for you."

I don't know how widespread these practices are.

The outcome of the open day was that the parents who knew their children would not be able to conform to those expectations went elsewhere. Many of those children will be younger, or less developed. Or they may have parents who have found setting behavioural boundaries or implementing routines difficult.

They are children who need nursery.

In our comprehensive system of primary education, their families should be able to access it.

In the case of the parent who spoke to me, her reason for turning away was simpler: she didn't want that type of early education for her son.

But she noticed that more of the middle class and avowedly aspirational parents were prepared to go along with the executive headteacher. It's an informal, but powerful, version of selection. As Pierre Bourdieu noted, schools are always most successful with those whom they do not have to teach how to learn. Therefore, some schools are disposed to finding ways of keeping out children who they don't think are "ready to learn".

Here's another way it happens.

A nursery class in a primary school has a settling in policy which says what children must be able to do, before they can stay for all their sessions.

They must be able to stay awake and energetic throughout the nursery session. They must behave appropriately and non-aggressively for the majority of the time. They must attempt to manage their own personal hygiene needs.

On this basis, pretty much all of the most vulnerable children in the nursery schools I know would be prevented from accessing their full place.

No children from families with poor bedtime routines.

No children who need the extra help we can give them, in collaboration with their parents, to manage socialising with others.

They'd all be at home for the nursery year.

Then they would arrive in reception, and their needs would not have been addressed. They would have a horrible and distressing time.

Off-rolling
Ofsted have been expressing their considerable concerns about "off-rolling", where schools find ways of getting children off their rolls before they can have a negative effect on exam results.

Shouldn't we be just as concerned about this "pre-off-rolling"? Are we excluding children before they have even started their education?


Posted by Julian Grenier at 14:34 No comments: