A few days back I promised to reply to three long threads on Twitter from the Early Childhood Maths Group (ECMG). Before I get going, I have a couple of observations to make about the debate so far. Firstly, it's extremely difficult to reply to a discussion in this form. Twitter is uniquely unsuited for detailed discussion. Just pulling all the Tweets together for this blog has been quite a job, let along responding to the points made.

Secondly, I'm struck by the fact that ECMG is an anonymous group. Neither the groups's Twitter profile, nor its blog, tells us who's its members are. It's clear that the group has expertise and knowledge: why the secrecy?

The ECMG were replying to a two-part blog which I wrote with Debbie Morgan, Director for Primary Mathematics at the National Centre for Excellence in the Teaching of Mathematics (NCETM). This blog is my response - I am not speaking here for the NCETM or the East London Research School.

Our two-part blog strives to provide a balanced account of how research and evidence can help us to improve the teaching of maths in the early years, whilst also being honest about the limitations of this approach. Some of those limitations arise out of gaps in understanding, areas where more research is needed. Other times, practice develops appropriately without the need for evidence first. If education were as simple as finding the evidence and putting it into practice, lots of us would be out of a job. Evidence is important: but so are context and professional judgement. It isn't reasonable to expect everything any early years setting or school does to be 'evidence based'.

Onto the ECMG's Twitter thread. Day 1 begins with the following argument: 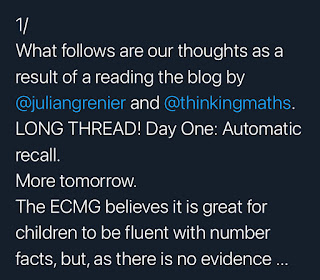 There are several problems here. Our blog makes it clear that secure understanding, not just recall, is crucial. That's why the curriculum for maths in reception must focus on deep understanding of numbers up to 10. It is important for children to have many different experiences of using numbers up to 10, partitioning, solving problems and so on. As we say in our blog, 'the ELGs are assessments, and should not drive the early maths curriculum'. I agree with the ECGM when they emphasise 'understanding, not just recall'.
However this section of the thread from the ECMG treats the Early Learning Goals (ELGs) as if they are a curriculum. If that misunderstanding is acted on, it's dangerous:  it puts the emphasis on a specific goal, rather than on secure, broader understanding of how numbers work. The ECMG regularly point out the need for secure foundations in mathematical learning. There is an opportunity to work together here, rather than create a polarising debate by focusing on the ELGs and misrepresenting the argument in our blog.
The ECMG thread goes onto to quote from the independent evaluation of the pilot ELGs by the Education Endowment Foundation.  This research raised significant questions about the pilot ELGs, including the example quote on page 22. However, what the thread doesn't explain is that the current Early Adopter ELGs are different to the ones evaluated by the EEF. The research findings led to significant changes in the wording and content of the ELGs. The ECMG thread doesn't give us this context. But then again, Twitter is not the ideal medium for such contextualisation - one of the reasons I am surprised the ECMG chose to use it for this discussion. You can see further, out-of-context quotations from the EEF research below: 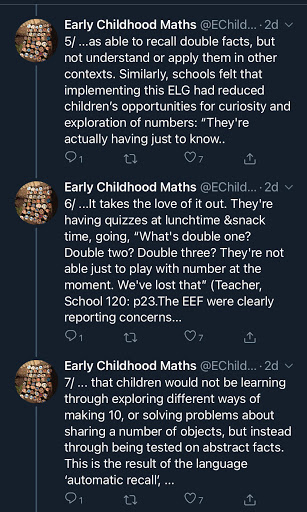 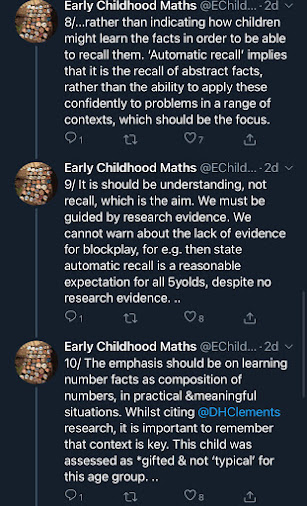 The section of the thread quoted above argues for 'understanding' to be the aim. Likewise, in our blog, we argue that understanding must come first. We never say that it should be trumped by automaticity:  'it's only when children’s understanding is secure that it will be appropriate for them to keep practising what they know so that they become more fluent and can operate with numbers automatically.' It looks like the ECMG thread is arguing that the Early Learning Goals are the curriculum for the Reception year. We don't advocate that approach in our blog. The nub of the difference seems to be whether we should work exclusively on composition of numbers in practical and meaningful situation, or whether we should consider that automaticity arises out those repeated experiences.
Finally, the focus on Abby being 'gifted' is red herring: as Doug Clements comments in the video being discussed,  'children have amazing potential to learn early mathematics'. It's misguided to emphasise giftedness or ability over the potential that every child has to become a successful maths learner, with the right support. 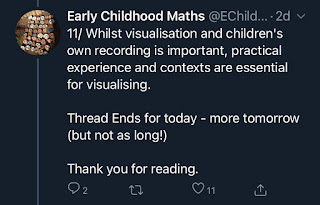 The thread's final emphasis on practical experience and contexts is spot on. We make a similar argument in the second part of the blog where we explore a case study from the EEF's Guidance Report about how a nursery school improved its provision to help children learn to count.
Onto the second thread. This makes a good point, again, about the importance of early conceptual learning. We make a similar point in our blog, as explained above. The claim that 'manipulatives and jottings reduce the cognitive load' is unsupported by any examples or research, so it's difficult to discuss it further. On the more general point, our blog doesn't argue against manipulatives: it merely notes that 'we need to think carefully about when and when not to use them.' 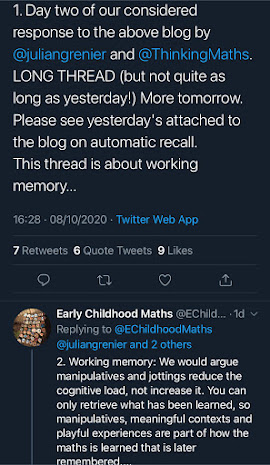 Finally, in this second thread the ECMG says it's 'worried' about a 'rote memorisation approach' with respect to children who may not have experienced much play-based maths outside of their early years setting.  There are two issues worth unpicking here. In our blog, we don't argue for 'rote memorisation'. Instead we note that 'automatic recall comes from knowing and understanding something so well, that we no longer need to think about it (Twomey Fosnot, C and Dolk, M, 2000)'. An approach which prioritises knowing and understanding things this well is clearly opposite to a 'rote memorisation' pedagogy.
Secondly, the 'worry' about children who haven't had much access to context and play-based maths outside of school could lead us in two different directions. We could think about such children as being deficient and therefore less capable of the sort of secure learning about number we discuss in our blog. Or, we could see this as an argument for high-quality, early years maths provision for every child. Is the ECGM arguing that a child's experiences outside of school should determine our belief in their potential to succeed? Let's hope not, as arguments like that can easily lead to some groups of children being judged 'less able' when they're really 'less experienced'. I daresay the ECGM would share that commitment to every child developing fluency in maths and a love of the subject. 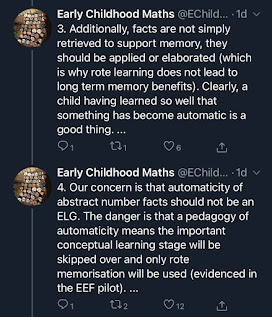 Now onto the third thread from the ECGM: 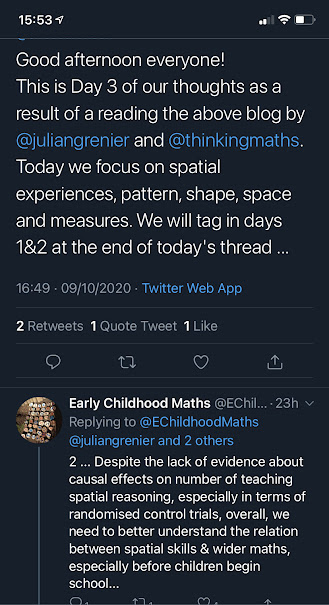 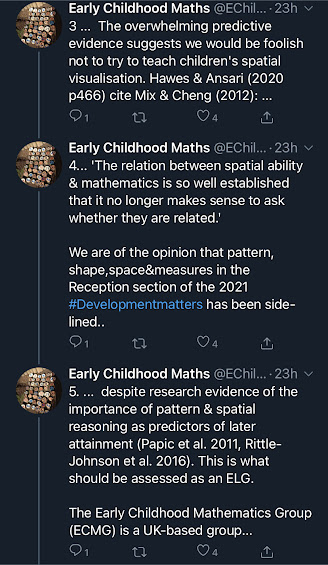 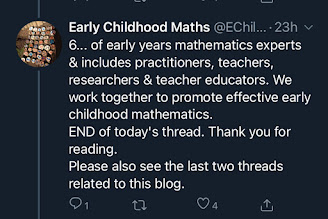 The argument that we need more research exploring the relation between spatial skills and wider maths is right. In our blog, we give block play as an example of a practice which is 'an enormously powerful way for children to learn maths'. But, as the EEF guidance report points out on page 11, there is only a ‘small body of research’ into the development of geometry and spatial thinking with respect to young children. The blog is not arguing that this lack of evidence means we shouldn't make plenty of time available for maths learning through block play. Like the ECGM, our blog looks forward to more research and better understanding in this area.
The ECGM contend that pattern, shape, space and measures have been 'sidelined' in the updated Development Matters. At this point, the thread appears to address issues beyond the blog. The thread doesn't offer a detailed comparison between the current version of Development Matters, and the revised version which replaces it in 2021. As a result, this assertion can't sensibly be evaluated. I think it's likely that I would agree with the ECGM about the importance of pattern, shape, space and measures in early maths.
This already feels like a very long blog but two additions to Day 2 of the ECGM thread caught my eye: 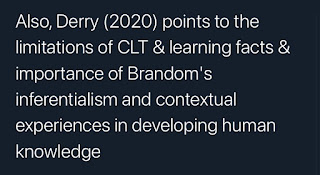 These tweets appear to support the ECGM with further evidence from research, but they're unhelpful to anyone who is trying to get to the bottom of these questions on Twitter. Firstly, there is not enough information to follow up the references. I don't even know what publication Paas and Sweller (2011) refers to, despite a fairly extensive search using Google Scholar. I daresay someone else can get to it quickly: I couldn't.
However, Derry (2020) is easy to find, a paper with the title of A Problem for Cognitive Load Theory—the Distinctively Human Life-form. It's a fascinating, tricky read which is a rewarding discussion of a set of philosophical ideas which, the author argues, 'have direct implications for pedagogy'. Derry argues (2020, p. 18) that 'there are certainly problems with the pedagogy of inquiry learning' as well as problems with direct or guided instruction, before concluding that 'both are limited by their lack of recognition of the distinctive life-form that is human being'. It's hard to see how this argument relates to the ECGM thread.
As I've been writing, I have also been reflecting on the process of putting this blog together. It's been hard to find the right tweets, take the screenshots and then put them in the right order, before addressing the arguments made. I doubt I'll be doing that again. My promise to discuss the three thread was made rashly on Twitter and I've regretted it at my leisure.
There are serious discussions to have about early maths.  I think they can be conducted in a better way. Long threads from un-named Tweeters don't strike me as the best way to discuss, debate and disagree over important educational issues.